There has been a lot of talk surrounding the topic of robotics and automation in manufacturing for the past number of years, if not decades. This subject has now become a reality since the beginning of the twenty-first century, but for most of that time robots were limited to large scale manufacturing operations. Those who were able to afford automated machines benefited from it increasing the gap between them and smaller companies. Luckily, due to advancements in the technology smaller scale manufacturing operations are now finally able to make use of robotics and automation after being locked out for so long. “Trainable robots” are now available to them so they too can now increase their productivity levels and narrow the gap once again. 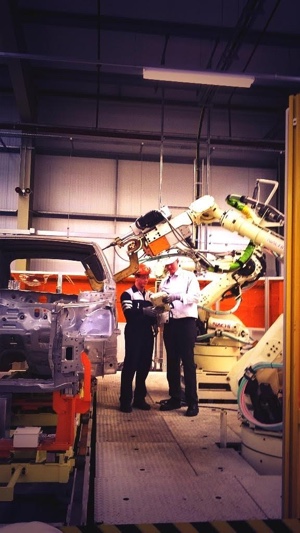 These new trainable robots do nonetheless operate differently that traditional automation robotics. These machines are slightly slower, but that is for safety reasons and they still boost productivity up to fifty per cent. The reason that they are slower is because they have to be safe for humans to work around. The traditional machinery is separated from humans by cages to ensure that no one gets too close. This of course requires the kind of space which is unavailable to most manufacturers. Small scale manufacturers need robots that can work in the same space as their human counterparts without being a hazard to those around them. This used to pose a dilemma for these manufacturers who would benefit greatly from automation. After all, automation has become necessary these days in order to grow a business at an ideal rate while effectively keeping up with orders.

The Canadian company Robotiq works with manufacturers to help automate their business. They manufacture the flexible robot grippers and sensors will assist in this transition. They focus on trainable robots, or what they call collaborative robots or “cobots.” They begin the process of automation in production with these machines. Its whole purpose is to assist human workers in their tasks. According to Robotiq there are a couple prerequisites that the robots must first meet in order to be deemed a trainable robot.
They must be able to:

Robotiq has developed a Dual Gripper most recently. While its predecessors only had one gripper, this has two grippers that can be used to remove a processed part from a machine and replace it with raw material. This seemingly little innovation has the potential to significantly increase their output on the manufacturing line.

Last year Continental Automotive Spain integrated several trainable robots into their production in an attempt to further automate their production. They have since experienced many benefits including simple integration, and an increase in productivity and a reduction in changeover times by fifty per cent. These robots cut production time down to twenty from forty minutes compared to completing the task manually. In addition to increase in productivity, trainable robots typically do not require coding in their set up, not needing the amount of PLC programming that traditional machines do in large scale manufacturing. This makes their integration quick and easy. The programming, maintenance, and training can be completed by a Electronics Technician, a Robotics Technician, or a Electromechanical Technician who will come in as needed.

What They Mean for You

The trainable robots need for maintenance by trained professionals highlights the misconception that robots take jobs away from people is a myth. It is true that trainable robots are more productive than human labourers for a number of reasons. They do not get tired, do not require paychecks, or even need to abide by typical shift lengths. So as they logically move into the most tedious and repetitive tasks of manufacturing, it frees skilled individuals up for more precise and technical work that these machines are not yet able to do. Trainable robots also require "human supervision" to ensure the work is consistent and that there are no issues with the production. This alone creates a new role to be filled. The machines also require maintenance by people with specific skills, as discussed above. As they make their way into the manufacturing industry, more and more new positions will be created to accommodate trainable robots’ presence, and to ensure that everything is operating efficiently.