The manufacturing sector is constantly reaching new levels of sophistication. Given the rate of technological advances, today’s digital customers expect an increasingly higher level of customization deliverable in an ever-shrinking timeframe. Of course, this is no easy feat; in order to meet this demand, companies need to find ways to reduce the product life cycle while enhancing the value of the product as they seek to retain their market share or vie for a larger piece of the pie. Though there are many ways in which a company can achieve either of these goals, intelligent automation can help them achieve both and allow them to get a foothold in the highly competitive trend of integrating the cyber and physical worlds of manufacturing that has been ushered in by Industry 4.0. 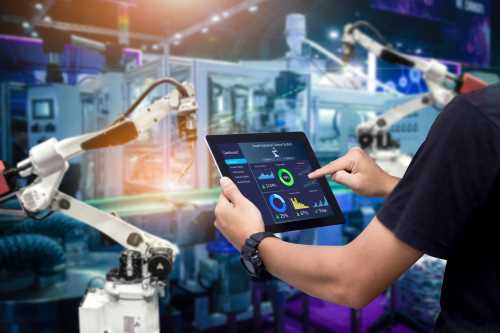 What is Intelligent Automation?

More specifically, what is Industry 4.0? If you’ve been following the manufacturing sector, you’re likely aware that it has been going through a significant evolutionary phase that largely consists of the digitization of operations. This transitionary period has been so impactful that it has been dubbed “Industry 4.0” - a moniker that represents the fourth revolution in industrial manufacturing that has occurred since the mid-eighteenth century.

This fourth industrial revolution is expanding on the integration of computer systems and automation during the third revolution - a phase that saw a surge in demand for workers with PLC automation training - and takes it to the next level by incorporating smart and autonomous systems driven by vast amounts of data and sophisticated machine learning.

What does intelligent automation provide that wasn’t already available during the third industrial revolution? Generally speaking, these systems sense and synthesize vast amounts of information and use it to automate entire processes and workflows, and can learn to adapt to changing conditions as they operate. The applications of intelligent automation are equally vast; from collecting, analyzing, and making decisions about textual information to guiding autonomous vehicles like Google’s self-driving cars and industrial robotics.

IBM’s Watson is a prime example of how this technology can be applied in real-world conditions. Watson, a powerful computer that became a household name following its appearance on Jeopardy!, is able to process mind-boggling amounts of textual information in order to quickly respond to complicated queries, a virtue that is immeasurably valuable in the medical field and in the finance industry, but also in the manufacturing sector where data must be constantly collected and analyzed in order to find efficiencies and expedite production.

Intelligent automation is also used to enhance commercial enterprises where stalling on a decision can cost a business an opportunity to improve their bottom line. Some of these applications are already fairly common practice; from presenting targeted offers to customers based on their profile and market analysis, to software that can identify and block fraudulent credit card purchases. The number of applications for intelligent automation is expected to grow exponentially in the years to come, but before we delve too deeply into the applications, let’s take a moment to examine the societal and commercial challenges that are creating a demand for this technology.

The Social and Business Improvements

Change doesn’t occur without a need for change. In the manufacturing sector, for example, an aging workforce that is becoming increasingly unable to perform some physical tasks paired with declining birth rates in many countries around the globe, has created an opening for automated alternatives. Where once robotic automation technology was considered not financially viable, some markets now view it as a sensible investment due to the cost and scarcity of labor. Fortunately for the human capital that currently exists within the hiring pool, automation technician training will ensure there will always be a demand for their services.

Processes and assembly lines have become increasingly complex, requiring a great deal of information to be extrapolated and analyzed, and human workers simply can’t keep up with it. Much in the same way that power tools were introduced to the manufacturing sector to assist human workers in meeting production requirements, intelligent automation can be viewed as a virtual power tool that enhances a worker’s ability to understand and use the vast sums of knowledge collected by the system.

In economies that have stagnated, are highly competitive, or perhaps not conducive to natural growth, companies are investing in intelligent automation to reduce costs and improve their production efficiency, or simply to find new segments of the market that will allow them to grow or give them a competitive edge.

The Applications of Intelligent Automation

The applications of intelligent automation are far-reaching; here are just a few examples:

As you can see, intelligent automation can be applied in just about every sector of the economy. With these changes comes numerous exciting and rewarding career opportunities, so Industry 4.0 is an exciting time for those in the manufacturing sector and beyond to update their employable skills. Until the next industrial revolution, intelligent automation will help companies increase their competitiveness and innovativeness while increasing the value of their offerings in the eyes of their consumer.