It is quintessentially undeniable that the manufacturing landscape has been forever changed thanks to the widespread implementation of robotics technology. The addition of robots to an assembly line, however, is just the beginning. The real opportunity lies in the development of an autonomous workforce that can work alongside of, and in collaboration with, humans. Here’s how collaborative robots, or “cobots” (as they have come to be known) are changing the face of automation, primarily in the automotive industry. 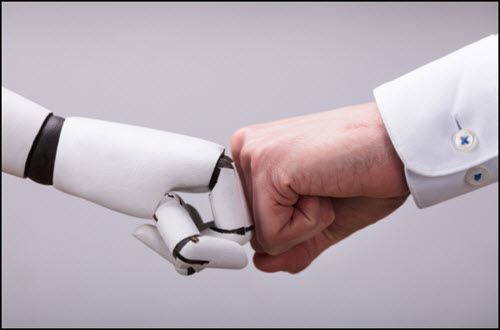 From Robots to Cobots

Modern industrial robots are charged with completing the repetitive and dangerous tasks on the assembly line. These robots do their jobs admirably, but there is one area in which they can stand to be improved: safety. Industrial robots are hulking, heavy components that are programmed offline, making them less able to respond to unanticipated conditions mid-action. This lack of built-in intuition means that traditional industrial robots are not as safe with respect to their human counterparts. The next generation of cobots, for their part, are built with human collaboration in mind. In addition to the hardware and software necessary to get the job done, cobots are also built with high-end force-torque sensors that can sense the presence of a human worker and automatically turn off should the worker get too close to a pre-configured area.

Improved safety is one thing, but it isn’t the only reason that more manufacturers are looking to cobots to fill out their assembly line. In many cases, using collaborative robots to work alongside humans can have a significantly better return on investment than a traditional autonomous workforce. For example, since safety is programmed into the cobots, there are fewer lost time accidents reported, and cobots can be programmed to pick up the slack if their human counterpart falls behind their production quota as well as help mitigate human made errors.

As it currently stands, there are human workers working the line as well as autonomous workers. The implementation of cobots can certainly make the process much more efficient, but the next era of industrial technology looks to take human/machine collaboration to the next level by making the cobot a virtual extension of the human body helping mitigate human error. Through the use of machine learning, cobots that work alongside humans can adapt to changing work conditions in real-time without having to be reset or reprogrammed to account for the newly introduced conditions. Compare that type of functionality with industrial robots that are programmed offline and unable to respond to changing conditions (without considerable downtime and programming) and it’s easy to see just how transformative this technology really is.

Cobots in the Automotive Industry

While it goes without saying that the number of applications inherent to the cobot is near limitless, These cobots and robots have experienced the greatest adoption in the automotive industry, where each process is mapped out to the second, and repetitive motion injuries are common and costly. For example, cobots can rivet chassis all day every day without tiring and without causing injury; in years past, a human worker tasked with riveting metal day after day would undoubtedly suffer a repetitive injury at some point, or may even just tire from the task. The inclusion of cobots to conduct such “low value” work creates greater, more rewarding opportunities for human workers.

Augmenting the Workforce, Not Replacing Them

One of the greatest fears many workers in the manufacturing sector lament is what the encroachment of autonomous equipment means for their job security. It has been said numerous times by those within the industry and those simply familiar with the technology that the purpose of industrial robots and cobots is not to supplant the human workforce, but rather to work alongside it. Though it may be true that the most repetitive and unskilled tasked will be left to technology, it paves the way for human workers to redevelop their skillset, and put their efforts towards more complicated tasks worthy of the human mind.

It’s very exciting to read how robots are constantly changing the manufacturing landscape. Perhaps more exciting still is what the universal adoption of this technology means for the quality and meaningfulness of work left to the human workforce. Undoubtedly, the rise of collaborative robots working alongside humans makes the demand for experienced and well-trained robotics technicians paramount to the future of work within this industry.